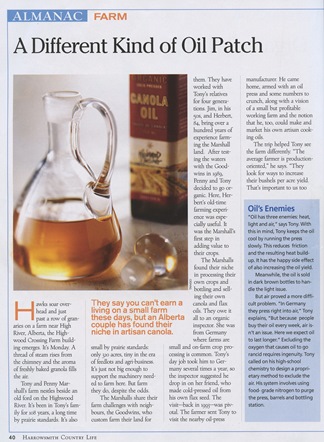 Hawks soar overhead and just past a row of granaries on a farm near High River, Alberta, the Highwood Crossing Farm building emerges. It’s Monday. A thread of steam rises from the chimney and the aroma of freshly baked granola fills the air.

Tony and Penny Marshall’s farm nestles beside an old ford on the Highwood River. It’s been in Tony’s family for 108 years, a long time by prairie standards. It’s also small by prairie standards; only 320 acres, tiny in the era of feedlots and agri-business. It’s just not big enough to support the machinery needed to farm here. But farm they do, despite the odds.

The Marshalls share their farm challenges with neighbours, the Goodwins, who custom farm their land for them. They have worked with Toy’s relatives for four generations. Jim, in his 50’s and Herbert, 84 bring over a hundred years of experience farming the Marshall land. After testing the waters with the Goodwins in 1989, Penny and Tony decided to go organic. Here, Herbert’s old-time farming experience was especially useful. It was the Marshall’s first step in adding value to their crops.

The Marshalls found their niche in processing their own crops and bottling and selling their own canola and flax oils. They owe it all to an organic inspector. She was from Germany where farms are small and on-farm crop processing is common. Tony’s day job took him to Germany several times a year, so the inspector suggested he drop in on a friend, who made cold-pressed oil from their own flax seed. The visit – back in 1993- was pivotal. The farmer sent Tony to visit the nearby oil-press manufacturer. He came home, armed with an oil press and some numbers to crunch, along with a vision of a small but profitable working farm and the notion that he, too, could make and market his own artisan cooking oils.

The trip helped Tony see the farm differently. “The average farmer is production-oriented,” he says. “They look for ways to increase their bushels per acre yield.”  That’s important to us too but our key question is, “How can we add value? They are commodity oriented. We are brand oriented.”

Still artisan-style oil was a bit of a stretch for an Alberta farm. In Germany, people buy a week’s worth of freshly pressed oil at a time. But here in the land of gallon jugs of cheap canola oil, Tony had a mountain to climb. He would have to invent the industry here because almost no one was buying it either.

His first converts were Alberta health-food stores and savvy chefs in Calgary and Canmore. Health-food vendors were looking for cold-pressed oils, especially flax seed oil as a healthy source of the omega-3 essential fatty acids. Meanwhile, the chefs were won over with the rich amber colour, sweet grassy aroma and nutty flavour of Tony’s oil. They christened Highwood Crossing’s canola oil as Canada’s olive oil.

At first, Tony and Penny processed their own canola crop, thanks to help from the Goodwins. But a problem arose when they realized that although their harvest was organically grown, it might be tainted because their fields were surrounded by conventional canola, which is often grown from genetically modified seed. To keep their organic claim 100-percent honest, Tony and Penny now buy their canola from further north, in Peace River country, which is more isolated from the genetically modified debate. Today, they have seven or eight crops in rotation on the farm, including oats, flax, rye and wheat. “When we started our canola and flax oils represented the bulk of our sales,” says Tony, proudly. “Today, oil sales are only about 20 percent of our business.” Now, their granola, muffin mix, power grains and rolled oats make up a good part of the week’s orders. Not bad for something that started on a wing and prayer. It just goes to show you that yes, there’s still a place for a small farm in today’s world.

All in a Week’s Work 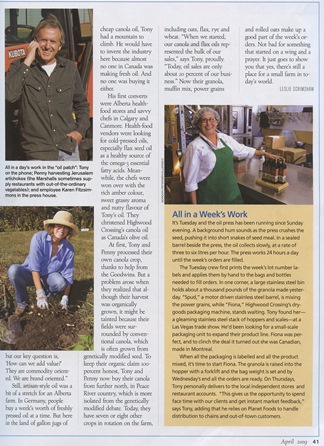 It’s Tuesday and the oil press has been running since Sunday evening. A background hum sounds as the press crushes the seed, pushing it into short snakes of seed meal. In a sealed barrel beside the press, the oil collects slowly, at a rate of three to six litres per hour. The press works 24 hours a day until the week’s orders are filled.

The Tuesday crew first prints the week’s lot number labels and applies them by hand to the bags and bottles needed to fill orders. In one corner, a large stainless steel bin holds about a thousand pounds of the granola made yesterday. “Spud,” a motor driven stainless steel barrel, is mixing the power grains, while “Fiona,” Highwood Crossing’s dry goods packaging machine, stands waiting. Tony found her- a gleaming stainless steel stack of hoppers and scales –at a Las Vegas trace show. He’d been looking for a small-scale packaging unit to expand their product line. Fiona was perfect, and to clinch the deal it turned out she was Canadian, made in Montreal.

When all the packaging is labeled and all the product mixed, it’s time to start Fiona. The granola is raised into the hopper with a forklift and the bag weight is set and by Wednesday’s end all the orders are ready. On Thursdays, Tony personally delivers to the local independent stores and restaurant accounts. “This gives us the opportunity to spend face time with our clients and get instant market feedback,” says Tony, adding that he relies on Planet Foods to handle distribution to chains and out-of-town customers.