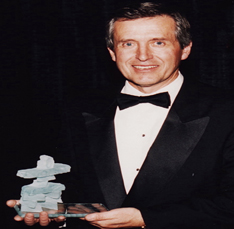 Penny and Tony Marshall of Highwood Crossing Organic Farm are the recipients of a Growing Alberta 2000 Innovation Award, recently presented by the Honorable Ty Lund, Minister of Agriculture, Food and Rural Development, and Ron Brown, executive director of Growing Alberta.

“This award recognizes the Marshalls’ efforts in developing on-farm, value-added food products and for marketing these items on a national level,” said Brown during the presentation ceremony.

The award came as a surprise to the Marshalls. “We had no idea we were nominated. We are really honored to be included.”

When the Marshalls switched from conventional farming to sustainable organic farming methods in 1989, they were returning to agricultural practices similar to those used on the same farm by Tony Marshall’s great-grandfather nearly 100 years earlier. “Today, however, our farm is organic by choice – not default,” Marshall said.

At Highwood Crossing all of the Marshall family is involved with running the business. Penny is a professional home economist by training. She looks after quality control, new product development and on-farm crop rotations. Tony is responsible for all aspects of production and marketing. Their daughters, Megan and Kerry help with production and market sales.

In addition to their farming operation, the Marshalls operate a certified organic on-farm processing facility where they produce several food products from the crops they grow. These organic staples include cold-pressed flax and canola oils, granola, dry mixes, as well as whole grains and hot breakfast cereals. Highwood Crossing products can be found on the shelves of leading natural and health food stores and are featured on the menus of a number of restaurants and hotels across Canada.

“Because we actually grow and process the majority of these products on our own farm, we have complete control over every aspect of production,” said Marshall. “This extra care and attention to detail ensures our clients receive fresh certified organic food of the absolute highest quality.”

The vast majority of our business is done in Alberta,” said Marshall. “But we do have clients all over Canada – from Halifax to Vancouver Island.

The Growing Alberta innovation awards recognize creativity and ingenuity in the pursuit of growth and sustainability for the agrifood industry.