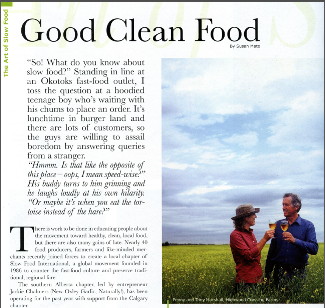 “So!  What do you know about slow food?”  Standing in line at an Okotoks fast-food outlet, I toss the question at a hoodied teenage boy who’s waiting with his chums to place an order.  It’s lunchtime in burger land and there are lots of customers, so the guys are willing to assail boredom by answering queries from a stranger.

“Hmmm.  Is that like the opposite of this place — oops, I mean speed-wise?”  His buddy turns to him grinning and he laughs loudly at his own hilarity.  “Or maybe it’s when you eat the tortoise instead of the hare?”

There is work to be done in educating people about the movement toward healthy, clean, local food, but there are also many gains of late.  Nearly 40 food producers, farmers and like-minded merchants joined forces to create a local chapter of Slow Food International, a global movement founded in 1986 to counter fast-food culture and preserve traditional, regional fare.

The southern Alberta chapter, led by entrepreneur Jackie Chalmers (New Oxley Garlic, Naturally!), has been operating for the past year with support from the Calgary chapter.

“I decided a few years ago that the slow food movement spoke to me and southern Alberta was begging to have a chapter,” says Chalmers, who this year planted about 4,000 garlic plants on her historic property west of Claresholm (the garlic is sold in Calgary’s 24 Co-op stores and through other merchants across southern Alberta).

“People are hungry for information about local food,” she says.  “We want to make as much of this food as mainstream as possible to reach a bigger audience.”

The company started selling a handful of products at farmer’s markets two decades ago and this spring opened a new manufacturing and office space in High River to meet mounting demands.

The pair was among the first Albertans chosen to attend a massive Slow Food International conference in 2004 in Italy.  The scale of the event and the fact that everyone there shared their passion blew them away.

“It was huge, a life-changing event, ” say Tony.  “We’d been going against the grain, so to speak, with out products so to be with 5,000 other like-minded people from around the world was incredibly gratifying.”

It may take some time for the teens in the fast-food lineup to realize [the benefits of local food], but the future looks bright as slow food proponents broaden their reach to young children, both rural and urban.  But for now, the trip triumphantly collect their burgers and fries and race outside.

“Next, please!” says the woman at the fast-food till, where my slow food research began.