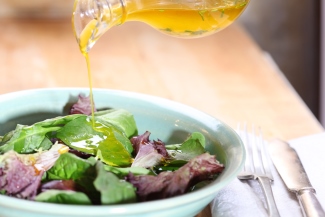 Canola is one of those conundrum foods. It’s a heart-smart source of low-saturated-fat cooking oil, it’s affordable and it has a barely-there taste and other characteristics that make it flexible for many uses, particularly frying.

But for those concerned about genetically modified organisms, organic ingredients, industrial seed patents and the rising worldwide issue of the farmers’ right to seeds, canola is not entirely wholesome.  That’s where cold-pressed canola, sunshine-hued and with heady floral notes that reveal the plant’s true nature, comes into play. As rare as hen’s teeth, it’s making a splash thanks to two small-scale producers in Canada: Jason Persall in Ontario and innovators Penny and Tony Marshall, south of Calgary, who happen to be smack in the heart of canola country.

A variety of rapeseed, canola was developed in Canada in the early 1970s when it was discovered the rapeseed’s oil — generally used for industrial purposes — could be harmful to human health. Using traditional plant breeding methods, scientists reduced quantities of the offending elements, erucic acid and glucosinates, to what government deemed safe levels.

Today, the country’s number-one cash crop for export, which provides about 70 percent of the vegetable oil consumed by Canadians, is mostly the product of a development in the 1990s: Monsanto’s genetically modified RoundUp Ready Canola.  Partly because the inoffensive oil boasts an extremely low saturated fat content, it has become a staple in producing margarine and other processed lards and is a popular choice for replacing transfats. Already, it is in many chains, from A&W to McDonald’s.

THE RETURN OF ORGANIC CANOLA?

More than 80 percent of canola production in Canada is genetically modified and questions surrounding long-term impacts of eating GM foods have put off some buyers and made any “health-food” product containing canola ineligible for organic certification.

It was the Marshalls, Alberta grain farmers from Highwood Crossing Farm near Calgary, who pioneered cold-pressed canola oil in Canada. The couple had switched to an organic-certified operation in 1983, a decade before learning about cold pressing seed oils in Germany. A pilgrimage to buy the proper equipment and learn the techniques proved “an eye-opener,” says Tony Marshall.  He visited a German town where people, cruet in-hand, shopped weekly at the small oil mill for refills of flax and other oils “just like going to the butcher or the baker.”

The Marshalls brought home a reciprocating screw press, which forces the seeds through a series of increasingly smaller chambers until the oil is released. An added bit of inspiration from the German model: they make their oil to order, with once-weekly pressings.

Chef David Wyse of Quarry Bistro in Canmore, Alberta calls the Highwood oil “one of my favourite things to use in the kitchen. It tastes like the Prairies.” The flavour, which is pronounced, proved a challenge when Wyse decided to make a typically Italian-style cake made with olive oil, but with cold-pressed canola. “It can be overpowering,” he says. “but I fiddled around until I got it right. It comes off as really nutty, really good.” The name? Highwood Crossing Canola Cake.

From the outset, the Marshalls’ goal was to produce a homegrown product that could compete in quality with top-grade — meaning cold-pressed — olive oil. “We don’t heat the oil at all. We have some proprietary things we do to keep it cool — under 4°C,” explains Tony.  The pressing is done in an oxygen- and light-free environment since both can be harmful to the end product. Through this method, the oil’s healthiest elements, including omega-3 and omega-6 fatty acids and vitamin E are left intact.

“It’s a slow process. The faster you run it, the more friction and therefore heat.” Aside from an increase in volume, including the contract with Sobey stores, little has changed — other than the Marshall’s prime resource.

Highwood Crossing Farm is located in a broad sweep of farmland sprouting GM canola. The Marshalls used to grow their own seed, but given the issues of cross-contamination, they can no longer guarantee their crops as non-GM and have since sought out farmers in remote locales. “I work with five or six farmers all up in Peace River country — it’s further north and there isn’t the chance of cross-contamination,” says Tony. To be certain, he sends out random samples for DNA testing.

Remember the case of Percy Schmeiser? He is the Prairie farmer who tried and failed to sue Monsanto for contaminating his land with GM seed. Canola grows through cross-pollination and is carried on the wind. Schmeiser not only lost, he was sued by the company for illegally growing RoundUp Ready canola.  Last spring, after a decade-long, David-and-Goliath battle, the aging folk hero won a cheque for $660 from the multinational company: the cost of removing the offending plants. The money was not the point: it was a moral victory.

When Ontario farmer Jason Persall decided a few years ago to explore making cold-pressed canola oil, he had an easier time guaranteeing non-GM seeds. The climate in the southwestern part of the province, where his crops are sourced, is suitable to winter canola, whereas RoundUp Ready is a spring variety.

For his brand of Pristine Oils, Persall uses techniques similar to Marshall’s operation, although he reports a heat level of 26°C. Chef Jamie Kennedy of JK Kitchens in Toronto says, “I was so impressed with these oils. They really taste like nothing else. I think they will generate a whole new lexicon in Canadian food.”

With declining prices in grain, Persall, a grower of wheat, soy and corn recalls he had been “looking for something ‘value-added’ to make the farm more sustainable over time.” After reading about the health benefits of canola oil, he fixed on a pure product using the cold-press tradition, bought a Comet expeller from Germany and set to work.

Each summer, Persall drives two hours to collect his supply of 40 hectares worth of the raw, non-GM seed. Back on the farm, the small kernels are cleaned of dust and chaff and then run through the cold press at about 26°C. After an initial filtration, the cloudy liquid passes through a cold-filtering system that coagulates small particles and delivers what he describes as “a nice, shiny clarity.”

In the eight years since starting the business, he has tried and failed to compete with mainstream canola oil that sells in supermarkets at less than half the price of his Pristine brand. Discovering “the back-door approach, which means reaching the consumers through chefs” has brought success. Now, his ratio of restaurants to retail clients is two to one.

Chef Anthony Walsh of the high-end Toronto restaurant Canoe is just one of many pros lapping up the stuff. “It’s got a real life of its own, so you don’t want to mess with it too much,” he says. A favourite dish is a tomato salad á l’Antiboise with a twist: tarragon instead of the usual basil to better match the oil’s “very grassy” quality.

“I call it gourmet gold,” said culinary author and Canadian food expert Anita Stewart. “That’s what it is: Canada’s answer to olive oil.”