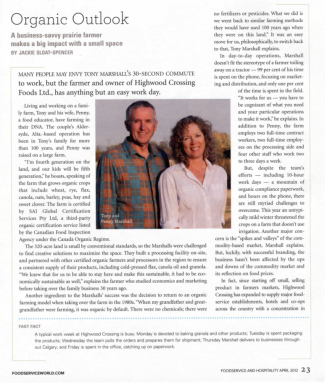 Many people may envy Tony Marshall’s 30-second commute to work, but the farmer and owner of Highwood Crossing Foods Ltd., has anything but an easy work day.

Living and working on a family farm, Tony and his wife Penny, a food educator, have farming in their DNA.  The couple’s Aldersyde, Alta.-based operation has been in Tony’s family for more than 100 years, and Penny was raised on a large farm.

“I’m fourth generation on the land, and our kids will be fifth generation,” he boasts, speaking of the farm that grows organic crops that include wheat, rye, flax, canola, oats, barley, peas, hay and sweet clover.  The farm is certified by SAI Global Certification Services Pty Ltd, a third-party organic certification service listed by the Canadian Food Inspection Agency under the Canada Organic Regime.

The 320-acre land is small by conventional standards, so the Marshalls were challenged to find creative solutions to maximize the space.  They built a processing facility on-site, and partnered with other certified organic farmers and processors in the region to ensure a consistent supply of their products, including cold-pressed flax, canola oil and granola.  “We knew that for us to be able to stay here and make this sustainable, it had to be economically sustainable as well,” explains the farmer who studied economics and marketing before taking over the family business 30 years ago.

Another ingredient to the Marshalls’ success was the decision to return to an organic farming model when taking over the farm in the 1980s.  “When my grandfather was great-grandfather were farming, it was organic by default.  There were no chemicals, there were no fertilizers or pesticides.  What we did is we went back to similar farming methods they would have used 100 years ago when they were on this land.”  It was an easy move for us, philosophically, to switch back to that, Tony Marshall explains.

In day-to-day operations, Marshall doesn’t fit the stereotype of a farmer toiling away on a tractor; 99 per cent of his time is spent on the phone, focusing on marketing and distribution, and only one per cent of the time is spent in the field.

“It works for us — you have to be cognizant of what you need and your particular operations to make it work,” he explains.  In addition to Penny, the farm employs two full-time contract workers, two full-time employees on the processing side and four other staff who work two to three days a week.

But, despite the team’s efforts — including 10-hour work days — a mountain of organic compliance paperwork, and hours on the phone, there are still myriad challenges to overcome.  This year an untypically mild winter threatened the crops on a farm that doesn’t use irrigation.  Another major concern is the “spikes and valleys” of the commodity-based market, Marshall explains.  But, luckily, with successful branding, the business hasn’t been affected by the ups and downs of the commodity market and its reflection on food prices.

In fact, since starting off small, selling product in farmers markets, Highwood Crossing has expanded to supply major food-service establishments, hotels and co-ops across the country with a concentration in Calgary, including restaurants such as River Cafe, Rouge and Open Range steakhouse.

About 10 to 15 per cent of the farm’s sales are from high-end foodservice establishments, and chefs appreciate the local, organic labels, Marshall explains.  “What we are seeing are more requests for gluten-free, allergy-free items.  We are a nut-and-peanut free facility, so that’s certainly something the chefs are aware of, and more conscious of,” he explains.  “The other thing that our chefs are concerned about these days is GMOs.  I get lots of questions about whether or not our products have been genetically modified.”

Katie Tuff, general manager of The Bison Restaurant & Terrace in Calgary applauds Highwood’s back-to-basics approach.  “We focus on local farms that use sustainable practices.  We are proud to support suppliers who specialize in the bounty this area has to offer,” she says.

Mark Carrillo, general manager of Calgary’s Farm restaurant is also a fan.  “We use Highwood Crossing farm canola seeds in our salads because of the quality of the seed and texture, which produces a fantastic final product,” he says.

Local food is certainly at the forefront.  In fact, Marshall sees more urban agriculture in the future, although he’s realistic about the need for larger farms.  “I see agriculture becoming bigger, but my hope and dream is that we would see more small, mixed farms — people getting back to traditional agriculture as we knew it 100 years ago when people were growing more of their own food.”  Urban farming is vital with more people getting involved in the food process, growing vegetables on the condo balcony or businesses building rooftop greenhouses to facilitate community-supported agriculture.  “There’s a huge hunger for good quality, local, sustainable food,”  says Marshall.